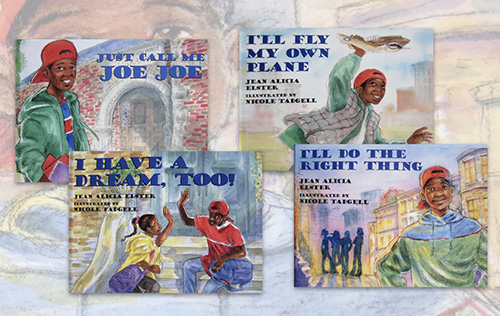 In this first installment, Joe Joe faces a shop owner who lashes out at him, assuming that Joe Joe was part of the gang that trashed the store. An avid reader, Joe Joe gets a book from the local library and is inspired by the story of Negro League baseball legend “Cool Papa” Bell, whose life teaches a valuable lesson on self-esteem.

Volume Two—I Have a Dream, Too!

In this second installment, Joe Joe faces his peers, who ridicule him for dreaming of attending college one day. Through reading a book about Mary McLeod Bethune—an influential African American woman who overcame poverty and the lack of a formal education at an early age to become the founder of a college and an advisor to President Franklin D. Roosevelt—Joe Joe realizes that with hard work, dreams can come true.

Volume Three—I’ll Fly My Own Plane

This third volume introduces Joe Joe to the Tuskegee Airmen. After reading their story, Joe Joe chooses not to take advantage of an opportunity to make “quick money” in an illegal way in order to afford an expensive remote control plane. Instead, he keeps his job at the local corner store and is content to fly the plane his dad has made for him.

Volume Four—I’ll Do the Right Thing

In this final volume, Joe Joe faces gang trouble at school. He has to make a difficult decision about whether to join Tyrone and his crew, the Defenders, or to follow the example of Ralph Bunche, the first African American to receive the Nobel Peace Prize. Reading about the life of Ralph Bunche leads Joe Joe to appreciate individuals who stand apart from the crowd and help others work out their problems in a peaceful way.

“The story teaches Joe Joe that even though he is treated unfairly because of his race, it doesn’t change who he is.”

“Thanks again for the great stories and characters in the “Joe Joe in the City” series. They are now a staple in every class I teach.”

HOW IT HAPPENS is a community read!

HOW IT HAPPENS has been selected as a...