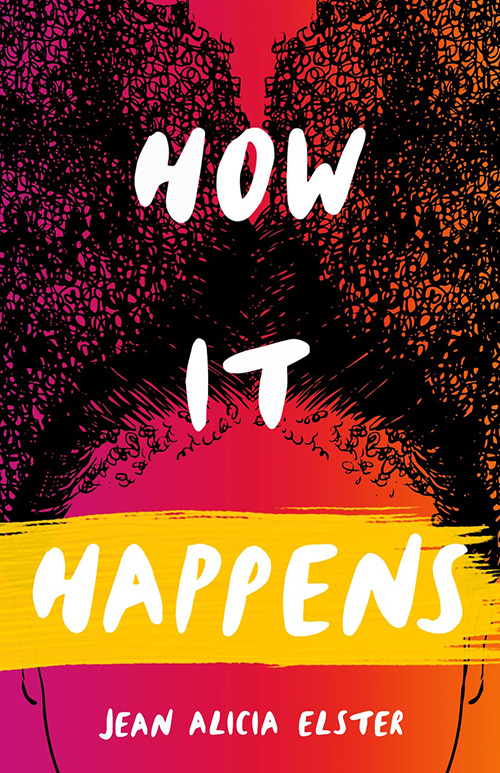 How It Happens follows the story of author Jean Alicia Elster’s maternal grandmother, Dorothy May Jackson. Born in Tennessee in 1890, Dorothy May was the middle daughter of Addie Jackson, a married African-American housekeeper at one of the white boardinghouses in town, and Tom Mitchell, a commanding white attorney from a prominent family. Through three successive generations of African-American women, Elster intertwines the fictionalized adaptations of the defining periods and challenges—race relations, miscegenation, sexual assault, and class divisions—in her family’s history.

A continuation of the plots begun in Elster’s two novels Who’s Jim Hines? and The Colored Car, How It Happens continues the story for an older audience and begins with Addie’s life before the turn of the twentieth century in the South as a married Black woman with three biracial daughters navigating the relationship between her husband and Tom Mitchell. Later the story shifts to Addie’s daughter Dorothy May’s experiences both as a child and later, as a teacher who, choosing between her career and marriage to a man she barely knows, moves to Detroit. The story moves along with Dorothy May’s daughter Jean, who, with the support of her mother and the memory of her grandmother, confronts and comes to terms with her role in society and the options available to her as a college-educated Black woman in the post–World War II industrial North. While there is struggle and hardship for each of these women, they each build off one other and continue to demand space in the world in which they live.

“A captivating and necessary story that navigates through a difficult part of American history in a way that people of all ages can understand and connect with. In sharing her family’s story, Elster shares the story of so many of us.”

—Kelly J. Baptist, author of Isaiah Dunn Is My Hero and The Electric Slide and Kai

“A beautiful and meticulously researched novel, How It Happens takes us into the world of three memorable young Black women, Addie, May, and Jean, each living in a different generation, each seeking to achieve freedom. Looking at racism straight in the eye, Jean Alicia Elster has written a powerful and timely story of resilience and hope. A must-read novel for all young adult readers.”

“The history of slavery and oppression is white history. The story of survival is black history. Through the lens of one black family’s experience in America, Elster details racism’s vicious assault on the black family, and how African Americans have triumphed regardless. Thank you, Jean Alicia Elster, for reminding us exactly how victory happens.”

“How It Happens is an excellent conversation starter. It offers a slightly different viewpoint than I’ve seen presented before—without the rose-colored softening of a fateful relationship that started with an order that, in that time and place, could not be refused.”

“How It Happens…is such a unique novel because it tackles racism from multiple perspectives, each written beautifully.”

See the Media page for  video excerpt of...

Elster’s HOW IT HAPPENS is available to order now! Click here to see order link.