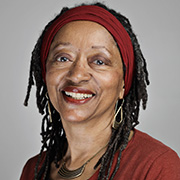 In addition, Elster is the author of the children’s book series Joe Joe in the City, published by Judson Press, which includes the books Just Call Me Joe Joe (2001), I Have A Dream, Too! (2002), I’ll Fly My Own Plane (2002), and I’ll Do the Right Thing (2003). She was awarded the 2002 Governors’ Emerging Artist Award by ArtServe Michigan in recognition of the series, and in 2004, I’ll Do the Right Thing received the Atlanta Daily World “Atlanta Choice Award” in the category of children’s books.

In recognition of outstanding work, Elster was honored with a 2017 Kresge Artist Fellowship in Literary Arts, awarded by Kresge Arts in Detroit, a program of The Kresge Foundation. In addition, Elster was selected to be a member of the 2020-2022 Live Coal Gallery/Knight Foundation collaborative and the 2019 Live Coal Collective. She was also awarded residencies at the internationally acclaimed Ragdale Foundation in Lake Forest, Illinois, in 2001, 2003, and 2005.

Elster is frequently invited to speak at schools, libraries, and conferences throughout the state of Michigan and across the United States. Engagements include the following events: In 2020, Elster was a panelist discussing “The Importance of Authenticity in Nonfiction” for the Society of Children’s Book Writers and Illustrators-Michigan Chapter’s spring conference, Livonia, Michigan. Elster was a panelist among Michigan children’s book authors for the Detroit Writing Room Speaker Series, Detroit, Michigan.  Elster was also a virtual presenter at the 43rd Annual Youth Literature Seminar, Kalamazoo Public Library, Kalamazoo, Michigan. In 2019, Elster was the guest speaker for the Young Authors’ Festival at the University of Michigan-Dearborn and was the Black History Month guest presenter for the Pontiac Creative Arts Center. She was also a featured author at the Michigan Reading Association’s 2019 conference, speaking on Culturally Authentic Fiction. In 2018, she was the speaker/presenter for the 3rd Annual Yule Love It Lavender Farm Writing Workshop for Detroit Working Writers in Leonard, Michigan and a panelist on the middle grade novel for the 16th Annual Kerrytown BookFest in Ann Arbor, Michigan. In 2016, she was a presenter for the 60th Annual Conference of the Michigan Reading Association in Detroit, Michigan and the guest speaker for the Ann Arbor (Michigan) District Library’s “Write On!” Story Contest Awards. In 2015, she was the keynote speaker at the inaugural Association of Michigan Independent Schools (AIMS) Affinity Workshop in Bloomfield Hills, Michigan. In 2014, she was a guest speaker for the Vander Veen Center for the Book Program Series at the Grand Rapids Public Library in Grand Rapids, Michigan. In 2012, she was selected as the inaugural visiting author for The Lori Lutz Visiting Artist Series at The Roeper School in Bloomfield Hills, Michigan.

Formerly an attorney and now a professional writer, Elster has edited several books including The Death Penalty and The Outbreak of the Civil War (Greenhaven Press, an imprint of The Gale Group, Inc.), as well as Building Up Zion’s Walls: Ministry for Empowering the African American Family and Playbook for Christian Manhood: 12 Key Plays for Black Teen Boys (Judson Press). In addition, her essays have appeared in national publications including Ms., World Vision, Black Child, and Christian Science Sentinel magazines. She also collaborated in the preparation of the manuscript for Dear Mrs. Parks: A Dialog with Today’s Youth, by Rosa Parks (Lee and Low, 1996), which was honored with four awards including the NAACP Image Award and the Teachers’ Choice Award.

Elster is the founder and president of Write Word LLC (established as Write Word, Inc. in 1994). She and her husband live in Detroit, Michigan and are the parents of two adult children.

Bronze Medal for HOW IT HAPPENS!

HOW IT HAPPENS was awarded a Bronze Medal...